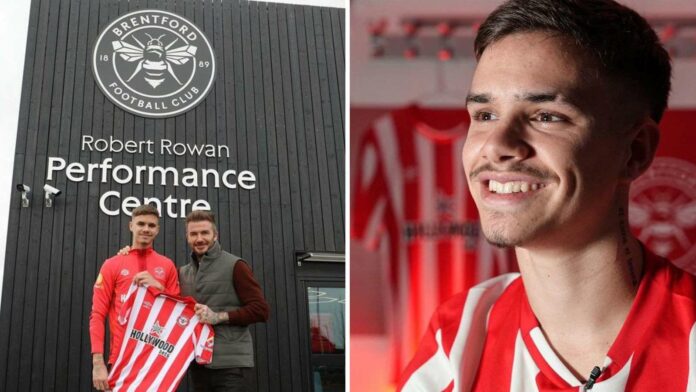 20-year-old Romeo Beckham is following in his father’s footsteps. David Beckham’s son has signed a loan deal with Brentford. So far, Romeo has played for Intern Miami. Beckham made his debut for the new club in a match on 10 January.

Romeo Beckham has been loaned to Premier League club Brentford for six months. The 20-year-old Beckham will join the B-team where Brentford’s central coaching staff will no doubt be watching him. This is a great omen for a young footballer who is getting closer to moving permanently to one of the best, if not the best, football leagues in the world.

Romeo Beckham has had a successful season at Intern Miami

Intern Miami is an American MLS league club co-owned by David Beckham. Beckham’s son played a full season for the team’s second team last season in a special MLS Next Pro league where young players are given a smoother transition to pro. During the season, Romeo Beckham scored 2 goals and made 10 assists for the club.

Brentford welcomed Beckham to his ranks by posting a short interview with the player on Twitter. The club also revealed the reasons why the club loaned the son of an English football legend. Brentford’s B team coach wrote about it on the club’s website. The statement read: – He is very technical and is someone who can move the ball quickly and cross. He’s also a perfect goalscorer and has the ability to play multiple positions for us, which is also nice. I love his standards and the way he conducts himself on and off the pitch. -.

Beckham, 20, made his debut for the new club on 10 January in a 3-2 London Senior Cup win over Erith & Belvedere FC. After the game, the coach spoke of the young Beckham’s game in superlatives.

– Romeo really took us forward in the winger position. He created some really good moments for us. He also had the opportunity to score, and I was delighted with him and the whole group that they kept the lead. We did not give up and survived. – we read the statement of the coach on the official website of the club.

David Beckham was present in the stands.