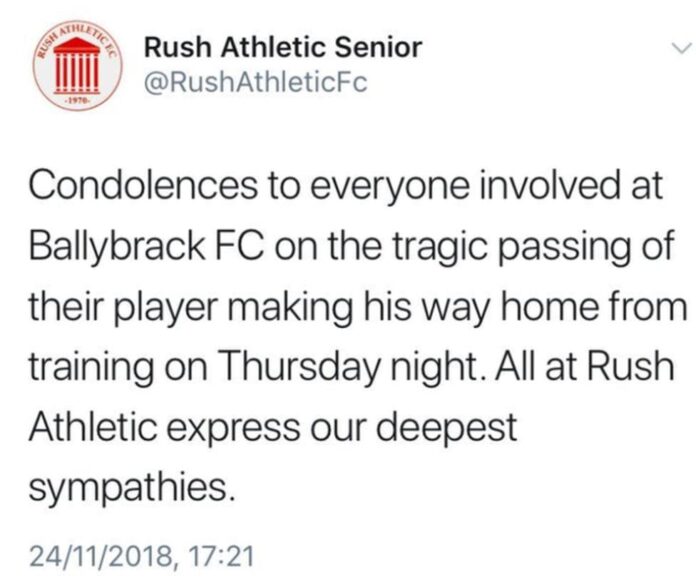 If you’re going to tell the authorities one of the players at your football club has died, it probably won’t fly all that well if he’s still alive

There have been plenty of odd stories to come out of the football world in the past couple of years, but we now have a new frontrunner.

We thought Sutton United’s Wayne Shaw resigning after getting into bother over eating a pie on camera couldn’t be topped, or that Sol Campbell getting his own age wrong in a video about people getting his age wrong was the pinnacle, but we underestimated Ballybrack FC.

The Irish football club concocted a story about one of their players dying in a road accident, and it got incredibly out of control.

Oh, they got this all screwed up! pic.twitter.com/RCztDXD2oL

Ballybrack, who play in the Leinster Senior League, contacted the league ahead of a match to tell them their Spanish player Fernando LaFuente had died in a road accident, and those in charge naturally moved to postpone the fixture.

In addition, other games in the competition held a minute’s silence before kickoff to pay tribute to the player. It’s what you’d expect from a properly run organisation, and the clubs should be commended for all coming together to remember La Fuente.

There was one small problem, though. He wasn’t dead.

Ballybrack backtracking to the League pic.twitter.com/Dx5CVpHGvo

“I was aware there was going to be some story on me but I thought it was going to be me breaking a leg or something like that,” LaFuente said after finding out what had gone on.

“My work started sending me all these news articles – that’s how I found out I was dead.”

A spokesman for the club, which is based in Dublin, issued a statement apologising for the “grave mistake” – we’re not sure whether or not the pun was intended.

So, what led to the confusion? Was there an accident in which he didn’t die? Was he back in Spain? Nope – despite initial reports of him leaving Ireland, he had just moved from Dublin to Galway and stopped playing for Ballybrack.

It’s an underwhelming end, but when the alternative is ‘man dying in his 20s’ we’re fairly satisfied with how it has all turned out.

The internet has certainly had a lot of fun with the incident, and it’s really put Ballybrack FC on the map, so in many ways it’s a victimless crime.

In fact, it’s a crime with a negative number of victims, based on the man at the centre of it all coming back from the dead. If anything, the club should be awarded extra points to make up for it.

In a statement, the club described the incident as “a gross error of judgement” and confirmed that the person behind the claims had been relieved of their duties following an emergency meeting.