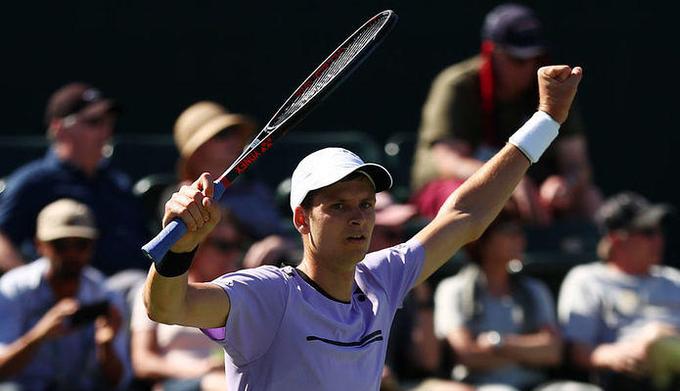 Oh man! This boy is making progress so fast! Hubert Hurkacz achieves another life success! In the night from Friday to Saturday Hurkacz outplayed the fourth racket of the world – Dominic Thiem – to zero. After the match Thiem praised Hurkacz and openly admitted that the Pole was simply better than him. On Sunday Hurkacz will fight for the fourth round of matches with Felix Auger-Aliassime.

In recent months Hubert Hurkacz makes a sensation at every tournament he plays. He achieves success after success and develops from match to match. He establishes his new life achievements and is the author of some of the greatest sensations of the last weeks. On the list of his recent wins over big rivals is for example Kei Nishikori (Hurkacz defeted him twice in a row recently) or Lucas Pouille. Tonight this list was completed by Hurkacz’s win over Dominic Thiem, who won Indian Wells last week, where Hurkacz reached the quarter-finals.

The biggest Polish sensation for years

Hurkacz’s match with Thiem was not the easiest one. Both tennis players already before the meeting emphasized that this could be a difficult clash and they did not make a mistake. From the beginning of the match, they had problems with reading the rivals’ intentions and maintaining their serve. However, happiness was favorable to the Pole. Despite minor problems Hurkacz could keep the break of rival’s serve to the end of each of the sets, to win the match 6:4, 6:4.

At the post-match conference, Dominic Thiem was impressed by the Pole and admitted that Hurkacz deserved to win.

I had a lot of emotions last week, but since then I’ve had a few days off, which should be enough. There were times when I had the advantage of break-point and it had to be maintained, but overall Hubert was simply better. It seems to me that I have not played at my highest level, although I felt good. His first serve is very difficult to guess. He also returns very well in times when he needs it most. My serve was not the best, and he put pressure on me and deserved to win at this meeting – source: link

Hurkacz’s victory with Thiem is the biggest sensation in Polish tennis for years. The last time a Polish tennis player defeated the player from the top five in ranking was in 2012. In November 2012 in Paris, Jerzy Janowicz eliminated Andy Murray, the third then-world player in the world. Six years have passed since then. Looking at the current disposition of Hurkacz and the dizzying pace at which the game of the Pole is developing, for the next victory over the TOP 5 player he will probably have to wait much shorter.

Hurkacz is praised for his mastery on the court and organized behavior. The Pole is also characterized by enormous modesty, which certainly helps him not to go crazy and not to succumb to success, only to go on a step-by-step basis. Those who know this will not be surprised by the following Hurkacz’s comment after eliminating Thiem from the tournament in Miami.

I am moving forward step by step with my pace. I know how much I still have to improve. The fact that now I played one of the best matches in my career, and perhaps the best, does not mean that I can do everything and know everything. I want to improve and gain experience all the time. I hope that there will be more matches like this one with Dominic in the future. For me, particular meetings are first and foremost a stage on the career development path. – source: link