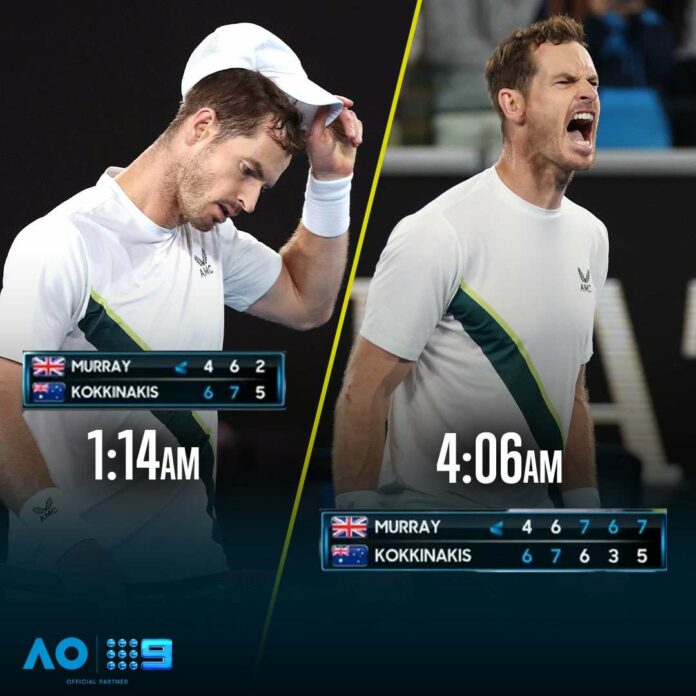 Andy Murray, who has been playing with a metal hip for six years now, is experiencing his renaissance. The Scot reached the third round of the Australian Open after a six-hour match with Thanasi Kokkinakis, and what he did in the third set will go down in history!

Andy Murray is having a renaissance! Playing for six years with a metal hip as a result of an injury, the Scot is the author of the first round sensation of the Australian Open. After a five-set battle, he eliminated Matteo Berrettini, one of the favorites of the tournament. After a day off, he returned to the court to advance to the 3rd round after an almost six-hour (5 h 45 minutes) duel with Thanasi Kokkinakis in a match that went down in history already during the third set. All thanks to Murray’s winning exchange, which drove the rival to madness.

Murray was on the defensive from the start. He ran from one side of the court to the other, defending the Australian’s shots until he hit the net and threw his racket to the ground in anger. This exchange is the essence of the Scot’s talent. On this exchange, children will learn tennis! See the exchange for yourself in the video below:

Andy Murray is a Scottish tennis player who used to be on par with the Big Three. This is the name of Rafael Nadal, Roger Federer and Novak Djokovic who have dominated tennis in the last 18 years. Murray was so good that a new tennis saying was created. It was the Big Four, which included the Big Three and Murray. Unfortunately, a few years ago Andy Murray fell out of the game, and it was thought that he would not return because he underwent hip surgery, as a result of which his hip was replaced with a metal one, and the doctors did not give him a chance to return to 100% fitness. Murray, however, could not imagine life without tennis and returned. Far from his former form, he played and trained in the hope that his former results would return. I think we can safely say that the Scot is back in the game!