Premier League fixtures for the next season are already known. The opening match of the new campaign will take place at Anfield, where vice-champion will face Championship winner, Norwich City. The game will begin at 9 pm on August 9th.

The next day, on Saturday, seven matches will be played. In the first game West Ham United will face Manchester City. In the following ones Crystal Palace will play against Everton, Leicester versus Wolves, Burnley against Southampton, Watford versus Brighton, Bournemouth with the second team that advanced to Premier League – Sheffield United, and Tottenham will face Play Offs winners, Aston Villa.

On Sunday at St James’ Park Newcastle will try to gain three points against Arsenal and at 5:30 we’ll be witnesses of the gameweek hit, Manchester United versus Chelsea. Even though both teams don’t represent the level from previous years, we should be able to see a great spectacle. It’s also very likely to observe two legends of each club on the managerial seat – Frank Lampard is very close to Stamford Bridge. Englishman will surely try his best to demonstrate, that it was worth it to hire him, and it’s a great opportunity to do so in the first clash.

In only two months we’ll see another exciting campaign. The question that comes to mind is if any team will threaten Manchester City and Liverpool in winning the title. Tottenham should finally strengthen its squad, Chelsea will go through a revolution, but it could an impulse to play better. Undoubtedly Arsenal and Manchester United are going to be hungry for trophies as well. 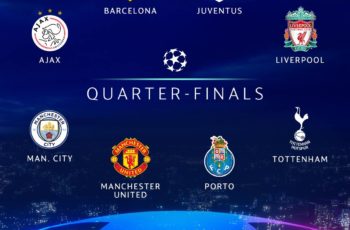 This Friday at 12 in Nyon, Switzerland, Champions League quarterfinals …

Zinedine Zidane is in an unbelievably strong position after he, …