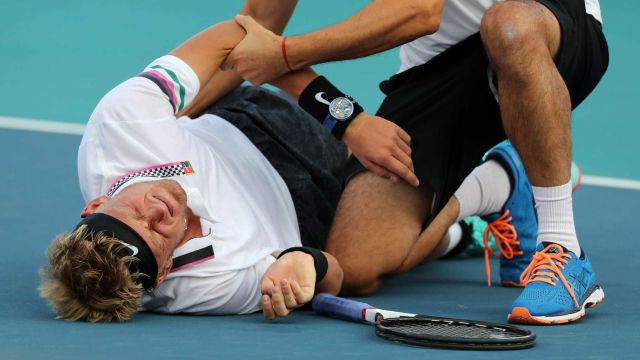 In the match of the first round of the ATP 1000 tournament in Miami everything went very well for 19-year-old Nicola Kuhn. He was one step away from throwing Misha Zverev out of the competition. Everything changed when in the third set Kuhn fell in convulsions on the court.

Ranked 75th in the singles ranking Misha Zverev was the clear favorite of the meeting. Sport fans and commentators started to wipe their eyes with astonishment when Nicola Kuhn, ranked in the third hundred of the ranking, first won the first set, and in the next one he had match balls at 5: 2 in games. The match, however, didn’t finish. Misha Zverev defended eight match balls  and eventually won the set 7: 5. In the third part of the meeting there was a situation that buried Kuhn’s chances for victory. In the fourth game of the set defending the break, the body of the representative of Spain refused to obey. What’s worse, the event occurred on the athlete’s birthday.

Kuhn fell limply on the court. The tennis player lay face down for a long moment, writhing in convulsions. He got convulsions, but he did not lose consciousness. Unfortunately, despite the medics’ intervention, Kuhn was unable to continue the meeting. The tennis player left the court with the help of medics. Leaving the stadium, he still had a stiff left leg that he could not bend in any way.

Left it all on court. The birthday didn’t go as I wished but I’m grateful for all the support I received today.

Nicola Kuhn will remember his 19 birthday for a long time. Let’s hope for his recovery to last a very short time!

She left in a good moment

We have a new No. 1 in the ranking, because Nadal withdraws from the Paris Master

Agnieszka Radwanska to end her career?

What has Rafa Nadal been doing over the last weeks?